I bought my G5 20” iMac in July of 2005 with a 400GB SATA drive and SuperDrive for $1879, it expired today at 9y3m of age. I think the 400 GB Hitachi Deskstar is original - so it is the longest lived hard drive I’ve owned. I pulled it and was able to read it from a drive cradle, though there’s nothing left on there we need. 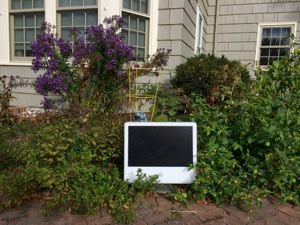 Today the comparable machine in Apple’s lineup is the 27” 3.2GHz iMac with a 1TB SATA drive but no SuperDrive for $1799. Of course that’s a far faster machine and a much nicer display, but the price is remarkably similar. Not to mention that we’d need to add an ugly external DVD player.

I doubt the 2014 iMac will last 9 years, not least because it’s costly to service. The G5 iMac was designed to be user serviceable — perhaps because Apple stores weren’t ubiquitous. The back came off with 3 standard Philips head screws. It was trivial to swap out a hard drive or memory. When the power supply died in 2011 ($150 for iFixit, there was a recall @2006) it wasn’t hard to swap it out. I think that replacement power supply just died; this time I decided a repair wasn’t worth the trouble.

The G5 iMac was not trouble free. Besides the power supply issues many died young from capacitor failure (defective manufacturing) — though I somehow missed that. The G5 ran very hot, it took Apple a year or two to figure out a reasonable fan management solution. Worst of all, the display developed internal discoloration [1].

Despite the issues, 9 years is a pretty respectable lifespan for a heavily used computer. We got a lot of use out of that machine, not least as a handy DVD screen.

Not a perfect machine by any means, but not bad.

[1] My 2009 27” iMac has a similar discoloration though it fades with use. It has had two drive failures in 5 years, the last time I put in an SSD.

Email ThisBlogThis!Share to TwitterShare to FacebookShare to Pinterest
Labels: Apple