Apple has quietly reintroduced something I've wanted even before CARE.ORG broke our deal and sold us out to the donation industry. They are again offering a way for non-wealthy people to donate anonymously to the Red Cross via iTunes.

They did this previously for Superstorm Sandy ...

iTunes will transfer 100 percent of all donations directly to the American Red Cross without sending users' names or contact information.

Unfortunately it's not a permanent service ...

The iTunes and Red Cross giving system was most recently activated following the devastating earthquake and resulting tsunami that hit Japan in March 2011. Before that, Apple offered the service in 2010, following a series of deadly earthquakes in Haiti.

We need Apple to make this a permanent service. Please join me in adding this request to Apple's iTunes Feedback Page. Apple can deduct the cost as a charitable donation.

We need this. Emily and I gave up our annual donations because of the deluge of mail, spam, phone calls and the like. These weren't huge donations, but they were non-trivial. If we were wealthier we'd give through a legal shield, but we don't have that kind of money. We can't be the only family hiding from the crazed donation industry.

So now we can donate to at least this cause. The only acknowledgement is an email receipt for tax deduction. The American Red Cross doesn't get any more information -- which is very Apple like. Here's how it looked on my iPhone today: 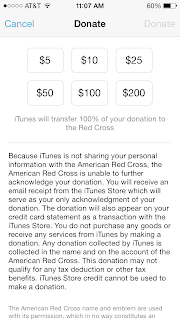 Email ThisBlogThis!Share to TwitterShare to FacebookShare to Pinterest
Labels: Apple